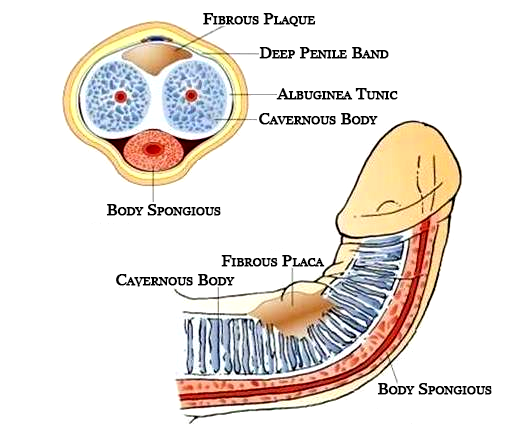 The Peyronie’s disease is characterized by the chronic inflammation of the Tunica Albuginea, a membrane that covers the corpus cavernosum of the penis.

The Tunica Albuginea is usually elastic and allows an elongation of approximately 30% of the length of the penis’ size when erect. In Induratio penis plastica, penis becomes thickened, inelastic and sometimes hard and calcified.

The hardening in the initial phase is limited to small nodules, in later stages the nodules can multiply and extend to the majority portion of the penis.

The disease has the highest incidence between 50 and 65, but can also appear at an early age. Quite frequently, it is accompanied by diabetes, gout, hypertension and atherosclerosis. Furthermore, it can be triggered due to past events of traumas or microtraumas occurred to the penis; or sometimes it can be triggered due to injuries incurred during sexual activity. The disease is most frequently found in concurrence with other connective tissue diseases (e.g.: Dupuytren’s disease or handheld fibrosis, ear cartilage fibrosis, tympanosclerosis, arthritis etc.). The key element of the disease is the appearance on the tunica albuginea (sheath) of the corpus cavernosum of the penis of the hardening zone(“plaque”) ranging from a few mm to 2-3 cm, which determines, the occurance, some local tenderness that is accentuated during erection, during the touching, masturbation or sexual intercourse. 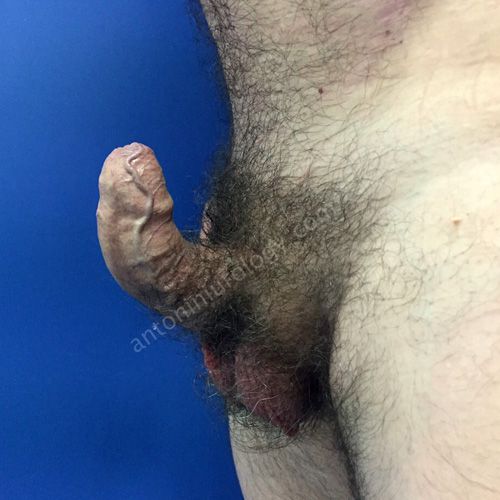 Quite promptly, it results into then bending of the penis at an angle of the curvature just in correspondence with the plaque. The bending can be modest, but in some cases, can be of such magnitude that makes the penetration difficult or impossible. Hardening of the area is indeed a cause of alarm for the patient (the main concern is to have a tumor), secondly pain in the area is also a matter of concern as it can prevent sexual activities and subsiquently cause the bending of the penis disordered with aesthetic and functional problems. The most reliable pathogenetic hypothesis traces the beginning of the disease to a microtrauma of albuginea with a small fracture of the sheath.

The process of tissue repair involves the production of fibrous substance by specialized cells (fibroblasts) to “close the fracture”.  This process does not stop and the production of the fibrous tissue continues determining the appearance of a plaque that is rigid, inextensible and perceptible to touch. Many therapies have been proposed but with a few results only. The only substance that can stop the disease seems to be Vitamin E. However, the therapy of Iontophoresis with verapamil and corticosteroids is helpful. At an early stage of the disease, the patient experiences a feeling of moderate penile pain accentuated by the erection. An area of localized hardening (plaque, nodule) appears and the penis tends to curve in correspondence of the plaque. Then the pain spontaneously tends to subside, the size of the plaque stabilizes and the bending stops; but this is just an apparent spontaneous improvement. Actually, with the involvement of the lateral wall of the cavernous, the penis can reach out to straighten, albeit at the cost of its length, it is often accompanied hourglass narrowing or by the formation of new nodules. The capability of erection gets reduced gradually, until the stage of impotency is achieved, which may also become absolute; this is because the changes faced by the tunic coating of corpus cavernosum interferes with the mechanism of seizure of the blood within them (erectile dysfunction “venous leak”). Over time, the plaque tends to calcify and the penis becomes shorter and thinner. These modifications occur with a devious trend, generally in the space of several months, sometimes even more slowly; but they may also occur at a rapid pace and with acute progression. Deep psychological problems occur inevitably , significantly due to the progression of the disease, erection difficulties or even out of self-developed “shame” to show a deformed penis to one’s sexual partner; the psychological distress can further amplify the problem of sexual functioning.

An examination by the specialist is the essential tool to detect this disease. Besides recognizing the plaque, the visit allows to estimate the elasticity index of the penis, that is to say, the ratio between its length while in erection and in the flaccid state. This ratio gives us information about the extension of induratio itself.

Ultrasound, however, has its own importance but is employed for getting precise indications only, namely the test tells us whether there are calcifications inside a plaque and above all if it is associated with a drug-erection test, that is, a pharmacologically induced erection conducted by injecting substances such as alprostadil into the penis, which allows us to study the arterial and venous vascular system, that is, the flow of the  blood coming in the penis through the cavernous arteries and the flows of the outbound blood, also called the veno-occlusive mechanism. This investigation is of particular importance when planning to undergo a surgical treatment as it lets you know if there are any risk factors for the decline in erection.

The induratio penis plastica is a benign non-tumoral lesion and may never become a tumor.

Surgery is reserved for cases where there is a penile curvature that makes establishing relationships difficult.